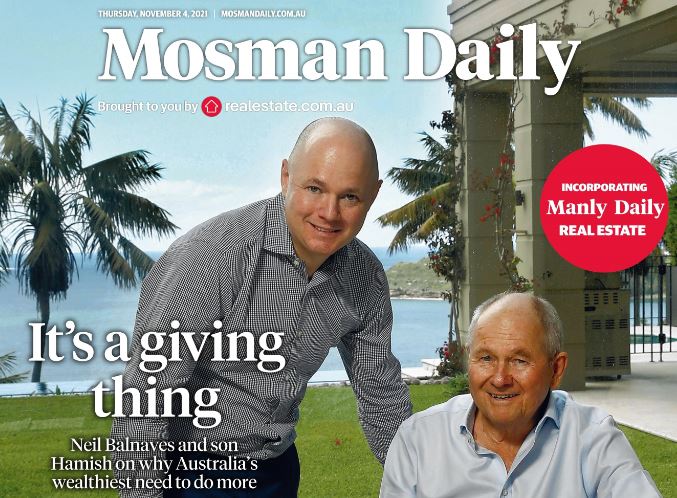 Posted at 09:05h in Latest News by Balnaves Admin

The art of giving.
Renata Gortan talks to Neil and Hamish Balnaves about the importance of philanthropy and spending the substantial family inheritance wisely.

Neil Balnaves sees his wealth as a responsibility. The 77-year-old from Mosman has given away $30m since founding The Balnaves Foundation in 2006 and has pledged to spend 70 per cent of his wealth on philanthropy. His view is that it’s his responsibility to pass on the good fortune he has to others who are less privileged. And he also considers it a great responsibility to give his money wisely, so it can have the greatest impact. While it would be easy to dole out cheques to various charities, he started his family foundation so the funds would deliver real results.

“You can’t just give it and walk away. We also took the decision that when we give money, we add value to it. Say if we gave a grant to somebody, we would help them with other grants in a similar area to cross-fertilise ideas to get more value out of it,” he says.

“I sometimes feel it’s really easy to give small amounts away without any responsibility, but if you’re going to give reasonably large sums of money, say more than $50,000, you want to do it on a longterm- thinking basis so that you’re actually building something with them and you’re in a sense partners to achieve something.”

One of Neil’s passions is the arts and the foundation has given money to theatres such as the Ensemble in Kirribilli, Belvoir in Surry Hills and NIDA in Kensington
as part of long-term partnerships.

“I really believe the arts is the soul of the country,” he says. “What defines Australia is its culture. If we have a vibrant arts world – whether it’s theatre, playing music, reading books at the library – whatever it is, it opens up the soul.”

Neil believes the arts is an essential avenue for Australians to tell their stories and build a cultural identity. One of the reasons the foundation funds the arts is the lack of government support. “Philanthropy can do something that government struggles with, it’s very hard for them to look at it on a community level or individual level. Philanthropy can seed stuff, philanthropy can take risks to prove a concept and then that can be taken up by government,” says Hamish Balnaves, 45, Neil’s son and general manager of the foundation.

“I believe philanthropy adds to the mix of funding and can make really strategic key investments that change the status quo.”

This is why the foundation does more than just write cheques and aims to amplify the effects of the funds it gives away. With Ensemble, a grant was given to build the theatre so that it became self-sustaining, then Hamish joined the board to help further develop the infrastructure the theatre needed. NIDA has been the beneficiary of long term Indigenous scholarships and the foundation funds two Indigenous plays a year at Belvoir.

One of the projects it was instrumental in bringing to life was The Drover’s Wife, Leah Purcell’s Indigenous retelling of the Henry Lawson classic. The initial grant was for Purcell to write the script through Belvoir. It was then funded as one of Belvoir’s Indigenous plays, won a slew of awards and Purcell suggested it be turned into a movie, so the foundation put up the funding. The movie is showing at the Sydney Film Festival at the State Theatre this weekend before being released next year.

“Indigenous theatre is important because you can read a book about facts of Indigenous history and how it affected people, but the power of a play is that, as well as teaching you the same thing, it also creates a sense of empathy that can change minds and hearts about an issue,” Hamish says.

“That’s the power of the arts and it’s why supporting Indigenous art is so important. Everyone talks about truth-telling, the arts play a part in people understanding what has happened and creates the basis for change, such as understanding the need for a treaty.” When Neil started the foundation, the pillars were arts and medicine. When Hamish and his sisters joined, these were expanded to include education with a focus on Indigenous Australians, young people and the disadvantaged.

“The foundation reflects what the family believes in and all the family gets agency in choosing grants and deciding on focus areas. Philanthropy should reflect what the philanthropist is passionate about,” Hamish says.

Find out more and read the full article here.