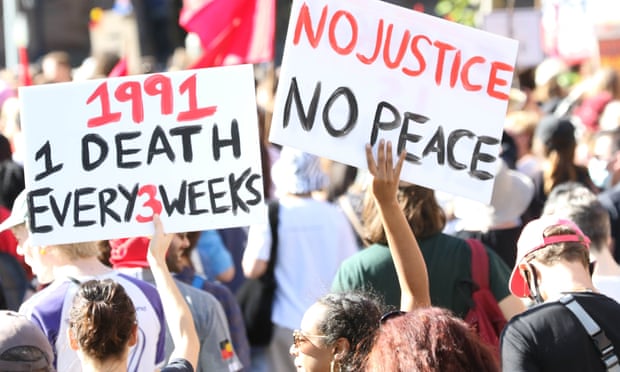 04 May Progress at last on deaths in custody data

Posted at 15:30h in Latest News, Media by Balnaves Admin

Published by Philanthropy Australia
4 May 2021

A little more than 30 years ago a landmark document was released that contained 339 recommendations advocating changes to the nation’s appalling record of Aboriginal deaths in custody. Only now, on the eve of this year’s National Reconciliation Week, was it announced that one of those vitally important recommendations of the Royal Commission into Aboriginal Deaths in Custody was finally going to be implemented. On the face of it, Recommendation 41 shouldn’t have been so hard. It read, in part:

That statistics and other information on Aboriginal and non‐ Aboriginal deaths in prison, police custody and juvenile detention centres, and related matters, be monitored nationally on an ongoing basis. I suggest that responsibility for this be established within the Australian Institute of Criminology and that all custodial agencies cooperate
with the Institute to enable it to carry out the responsibility. The responsibility should include at least the following functions:
a. Maintain a statistical database relating to deaths in custody of Aboriginal and non‐Aboriginal persons (distinguishing Aboriginal people from Torres Strait Islanders…)

But despite the data’s relevance for informing and shaping policy responses, it has apparently not been a priority.

Critical to this change in approach has been a philanthropic collaboration between The Balnaves Foundation and Guardian Australia.

The Foundation gave $300,000 to Guardian Australia’s Civic Journalism Trust in March 2018 to support Guardian Australia Civic Journalism Initiative, an initial three-year-long Indigenous reporting and educational project (it has since been extended by three years).
The collaboration came at a time when the future of investigative journalism was under threat and specialist reporting areas, especially Indigenous affairs, were underrepresented in the Australian media landscape. And last year, the initiative and its impact were recognised with the Indigenous Philanthropy Award at the Australian Philanthropy Awards 2020.
The Balnaves Foundation support funded the position of Indigenous Affairs Editor, Lorena Allam, an experienced journalist and Gamilarai-Yawalaraay woman, from north-west NSW, and enabled research to begin on the Deaths Inside project.
The goal behind establishing the database was to track and report on every known Aboriginal death in custody. When the Guardian’s work on the project started in 2018, the AIC data only went up to June 30, 2015.
The Guardian Australia project immediately identified the complexity of trying to identify each case from aged coronial reports and other documentation. It narrowed its focus to tracking the deaths in custody from 2008 to 2020. The end result has provided powerful and enduring evidence of systemic failures of the criminal justice system.
Lorena told Guardian Australia readers this week: “In 2018, my colleagues Calla Wahlquist, Nick Evershed and I created Deaths Inside because up-to-date information had been so hard to find. Deaths Inside has been updated annually ever since, building on decades of activism by Aboriginal families who have been turning up to inquests year after year. It’s been so gratifying to build on and amplify that work.’’
She noted that the AIC’s decision to report more regularly meant so much for the families of those who had died in custody but there was still much work to be done.

The Deaths Inside project was also recognised with Australian journalism’s highest accolade, a Walkley Award, when the judges hailed it as “…as a resource to be used by other reporters, lawyers and academics, but it also serves as a memorial to those who lost their lives and as a way for families to mourn their loved ones.’’

For The Balnaves Foundation, the funding initiative was a logical extension of its long-held commitment to Indigenous issues in Australia. The Foundation has wanted to see a shift in the systemic treatment and the public discussion about Indigenous Australians. Guardian Australia’s collaboration was a way of helping to address that.
The Deaths Inside project was one element of Guardian Australia’s broader Indigenous reporting, including the 2019 podcast series, Breathless, on the death in custody of David Dungay Jr.
The AIC has pledged to publish two reports in November to bring reporting of deaths in custody up to June this year.
Dr Rick Brown, acting director of the AIC, told Senate Estimates last week: “So like nearly all of our reports, they’re there to inform policy agencies for a policy response to problems and issues. So, the more timely, obviously, the better.”

The data will also be shared with the two government departments responsible for the ongoing implementation of the royal commission recommendations – the attorney general’s department and the National Indigenous Australians Agency. What is now known is that at least 475 Aboriginal people have died in custody since the end of the 1991 Royal Commission. AIC data shows that disproportionate rates of incarceration are still integral to the problem: Aboriginal people were more than six times as likely to die in police custody and 10 times as likely to die in prison custody than non-Indigenous people. With the Royal Commission’s recommendation No.41 finally being addressed, that still leaves the report’s final recommendation, No.339. It reads:

That all political leaders and their parties recognise that reconciliation between the Aboriginal and non‐Aboriginal communities in Australia must be achieved if community division, discord and injustice to Aboriginal people are to be avoided. To this end the Commission recommends that political leaders use their best endeavours to ensure bi‐partisan public support for the process of reconciliation and that the urgency and necessity of the process be acknowledged.