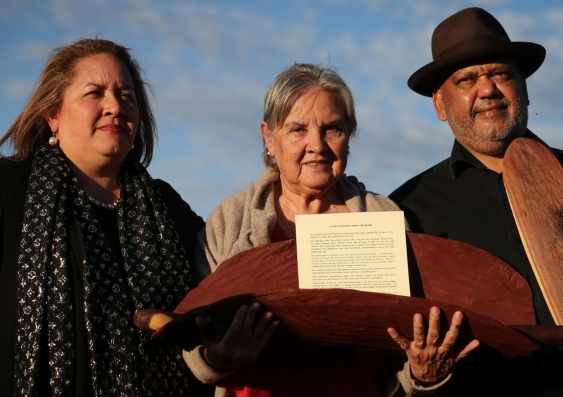 Posted at 12:13h in Latest News, Uncategorized by Balnaves Admin

Four years after it was written, judges says the ‘powerful and historic offering of peace’ offers a clear agenda for healing in Australia, and ‘it is now up to us all to make its vision a reality’
The Uluru Statement from the Heart has been awarded the Sydney peace prize for 2021 four years after it was written, with organisers saying time is up for the government to take action on the landmark statement. The judging panel said the Uluru statement was a “powerful and historic offering of peace” that was crucial to the “healing within our nation”, but had not yet been acted upon.

First presented to the Australian people in May 2017, the statement made two recommendations: a constitutionally recognised Indigenous voice to parliament, and a Makarrata process to investigate truth-telling and treaty-making. Neither have been implemented or, in the case of the voice, put to a referendum. On Wednesday, First Nations leaders Pat Anderson, Prof Megan Davis and Noel Pearson accepted the award on behalf of everyone who worked on the statement, which was the result of years of consultation with thousands of Aboriginal and Torres Strait Islander people. Anderson, an Alyawarre woman from the Northern Territory, told Guardian Australia she was “incredulous” when she found out the statement had won, and that the award was for the group, not individuals.

“It’s a fantastic, amazingly wonderful thing to receive,” she said. “Noel, Megan and I are receiving it on behalf of all of the Aboriginal and Torres Strait Islander peoples who attended the regional dialogues four years ago. It’s all their thinking. It’s all their work.” Anderson said she hoped the award would bring more awareness to the 439-word statement, which she urged every Australian to read. “We meaningfully and consciously gave the Uluru Statement from the Heart as a gift to the to the Australian people,” she said. “It’s a gift of healing. And indeed love. We don’t often like to use that word. But, you know, it’s a very, very emotional document.” Past winners of the Sydney peace prize include the Black Lives Matter and the #MeToo movement, Patrick Dodson, Archbishop Desmond Tutu, John Pilger, Noam Chomsky and Arundhati Roy.

Wednesday’s award coincided with national Sorry Day, and the day in 2017 when the Uluru statement was first released. Anderson said the award would hopefully “provide a lot of energy to the national conversation that we still need to have”. “Malcolm Turnbull, when he was prime minister, wouldn’t even allow a national conversation. Well, despite that, the nation once again, is ahead of its leaders.” Anderson said one of her main concerns was there was “a lot of misinformation out there” about the statement. The prime minister, Scott Morrison, and former deputy prime minister Barnaby Joyce have both previously erroneously referred to the voice as a “third chamber” of Australian parliament. “We’re mounting a public education campaign,” Anderson said. “We have translated it into 63 languages on SBS, so people can read the Uluru Statement from the Heart in their own language. And that’s had quite an emotional effect on a lot of people.“I think people have this misconception that it’s a very long statement. But it’s not. It’s very emotional, it’s beautiful. And it’s very short. Everyone should read it.”

In awarding the prize, the judges said the statement was a “clear and comprehensive agenda for healing and peace within our nation”. “It is now up to us all to make its vision a reality,” said Archie Law, the chair of the Sydney Peace Foundation. Anderson said it was important for all Australians to read it and to pressure politicians to act.

“We knew this before we left the centre of Australia, that the only way to win this really was to appeal to the Australian public,” she said. “After all, it’s the people who change constitutions. “I know we need the government of the day to do the necessary legislation … But they are probably not going to do that unless their constituents say to them in the Woollies, or wherever, that they really support the Uluru Statement from the Heart, and why. So I think we were absolutely correct to make it a gift. All the other attempts we’ve made, the bark petitions and everything, sadly, they’re in Parliament House, imprisoned behind glass. And we were determined for that not to happen to the Uluru Statement from the Heart.”

Noel Pearson said the statement was “the answer to the commonwealth’s desire to recognise First Nations in the constitution”. “The evidence four years later is overwhelmingly that Australians will support giving us a Voice. It’s time.” Anderson said that the idea of a constitutional voice had first been proposed by William Cooper in the 1920s and 30s. “It’s not new,” she said. “This is the latest attempt to get perhaps some arrangement, some settlement with us. This latest process is in fact 10 years long. It started a long time ago. But even before that, it started pretty much in 1788. We have been saying pretty much the same thing. This is our place. We belong here. And we need to be respected and acknowledged. It’s the turn of this generation, all of those of us who are over 18, it’s our turn to try to heal the nation and come to some kind of settlement … And I think it would be good if the Australian public took this seriously, and tried to inform themselves. That would be my ask of the Australian public. This is important. It’s our turn.”

For more information on the Uluru Statement of the Heart, click here