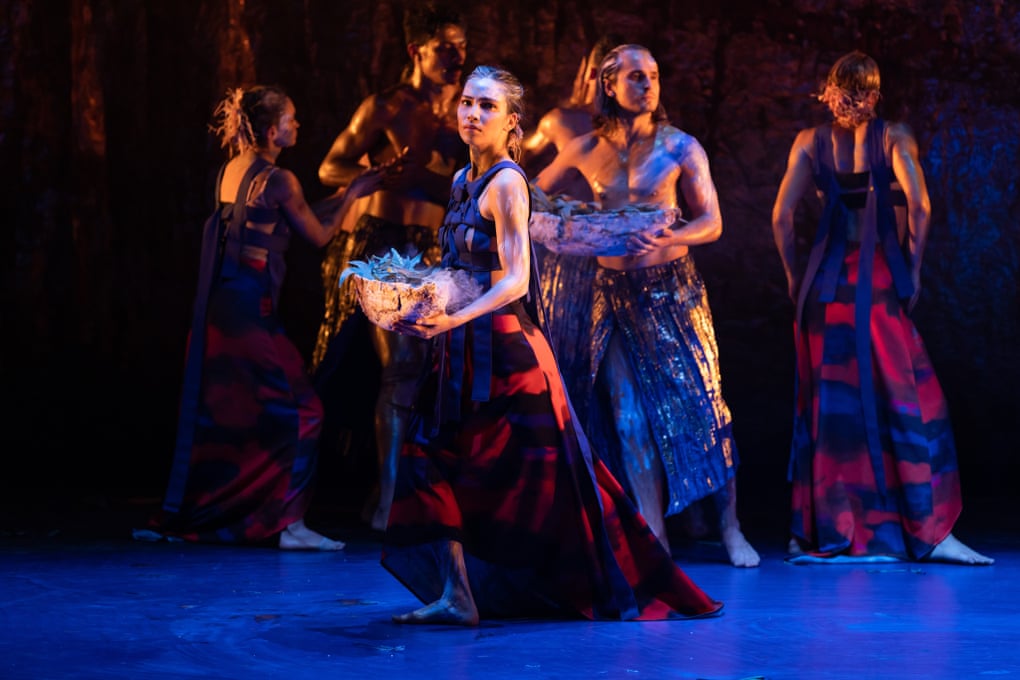 09 Jun ‘She blew me away’: Bangarra’s touching tribute to one woman’s passion, culture and legacy

Posted at 14:09h in Latest News, Media by Balnaves Admin

Published by The Guardian Australia
9 June 2021

Warning: Aboriginal and Torres Strait Islander readers are advised that the following article contains the name of someone who has died
She planted the seed for SandSong shortly before her untimely death in 2019. Now the acclaimed company is bringing the story of her country to life
In rehearsal studios at Sydney’s Walsh Bay, 16 dancers are recreating the experiences of the traditional owners of the Western Australian Kimberley region. The work, called SandSong, is set against the region’s extreme seasons: the dry, the wet, and the build-up to the cold. These stories were once carried in the metaphorical “knowledge dilly bag” of the late stage and screen actress Ningali Lawford-Wolf, who built a career in classic Australian films such as Rabbit-Proof Fence and Bran Nue Dae. She seeded some ideas for SandSong with her old stomping ground, Bangarra Dance Theatre, shortly before her untimely death at 52 in Edinburgh, during a 2019 tour of the frontier wars play The Secret River.
Born under a small bauhinia tree at Christmas Creek cattle station on the edge of the Great Sandy Desert, Lawford-Wolf spoke three languages – Gooniyandi, Walmajarri and Wangkatjungka – but little English until she was 11. Her father Eric, who became head stockman at the station, taught his children how to hang on to their culture. During her 1994 one-woman stage show, Ningali, Lawford-Wolf told audiences that she was 13 when she first met white people, when she started on scholarship at a Perth boarding school.

Lawford-Wolf “was so proud of her country; she loved her country,” says SandSong co-choreographer and Bangarra associate artistic director Frances Rings. The pair became like sisters when they trained together at a First Nations dance college in Sydney in the late 1980s. “She was naturally gifted. I wish I could have made the shapes she made. She had long legs, she was statuesque, and she looked beautiful.” Rings recalls one of their first weeks together in 1988, the year of the bicentenary: “We were kicked out of the dance studio and sent to meet thousands of other blackfellas in Redfern to march to Hyde Park. I was 17; I had no idea of my identity. Ningali was like, ‘Come on sis, we’ll do this together’.”

Lawford-Wolf would soon switch from dancing to acting when she realised she was a good oral storyteller. “She was a Kimberley girl, and a winter in these little dance studios was freezing: she was like, ‘Fuck this, I could be in a nice studio with a heater and work with actors’.”
SandSong opens with the dry season. Seven dancers form a huddle on the floor, making a shape like an emu’s cervical spine, at the edge of a blue line delineating a waterhole. Jila, or “living water”, is crucial to Lawford-Wolf’s culture; her brother, law man Putuparri Tom Lawford – also a keeper of the spiritual stories – is a cultural consultant on SandSong, alongside Ningali’s older sister, Eva Nargoodah.

One dancer prises the other performers apart with a large digging stick, and their bodies convulse: this is an abstract rendering of Indigenous exodus from country around 1906-07, when the Victorian-born white surveyor Alfred Canning was commissioned to create a stock route across 1,487km from Kimberley to Perth. A 1908 royal commission would exonerate Canning of ill-treating Aborigines, although he admitted chaining the Aboriginal guides at night. “Once the waterholes began being used to feed cattle and stock and were locked up and damaged or poisoned, [Indigenous] people had to move off country and into the stations and find work there,” Rings explains.

“It was inevitable this white route border was going to cut through all these significant jila holes and abuse it for their own purpose,” adds Bangarra artistic director and co-choreographer Stephen Page. “Yet Blacks had to maintain their cultural survival and the significance of these places. They had a foot in each world, asking for respect.”
Later in the show, three men are chained together at the neck, and the chilling voice of a cattle auctioneer cuts through composer Steve Francis’s soundtrack. “It was servitude; the people were paid in rations and food and clothing,” says Rings. “There was growing frustration. Domestics had to work there, even kids had to work on these stations.”

Rings, who with Page has taken the Bangarra ensemble back to the Kimberley three times to learn the traditional dances for SandSong, has seen the tree Lawford-Wolf was born under. “It blew me away that this girl from a little community, a little station, achieved so much,” she says. “But also the history of her family being not just displaced once or twice and [inflicted] by government policies, but removed off country and onto stations, and then off of stations and onto fringe settlements in Fitzroy Crossing. But they managed to survive, and their children are so strong and grounded.”

In 2002, Lawford-Wolf starred in Phillip Noyce’s film Rabbit-Proof Fence, the true story of three girls who escaped an Aboriginal mission, attempting to find their way home by following the anti-rabbit outback fence. The long-enforced government policies of taking children became known as the stolen generations. Lawford-Wolf played the mother of two of the girls, and the story chimed with her own: her father had been forcibly removed from his parents, too. Lawford-Wolf’s mother, Mayarn Lawford, played the grandmother in the film. They were both also language consultants, and can be heard chanting in Wangkatjungka on the soundtrack. “They didn’t just come as actresses,” Page says. “When Black stories are told and Black actors come in there, they don’t just walk in like the normal actor, especially if it’s directed by non-Indigenous people. They’re the educators.”

Page and Rings were in the Kimberley, teaching school dance workshops when they got word Lawford-Wolf had died suddenly in Edinburgh, from complications after an asthma attack. She had been playing the narrator in Sydney Theatre Company’s touring production of The Secret River; Page was an artistic associate on the show, which told the story of Indigenous massacres. Page and Rings immediately flew to the UK to commence sorry business, the Indigenous mourning requiem ceremony. “Eva and Tom, her brothers, her sisters, they [then] came to Edinburgh with us to bring her body back here to bury her on country.” Lawford-Wolf is survived by her partner, Joe Edgar, her children Rosie, Jaden, Alexander, William and Florence and two grandchildren, as well as her siblings and their mother, who will see SandSong together when it is taken back on country to the Kimberley at the end of its national tour.

Mother and daughter will again be heard speaking and whispering in language on the soundtrack, as the female dancers thread arms with one another and scoop water from the ground, performing a kinship story about the matriarchal Walmajarri line. Her choreographer friends have felt Lawford-Wolf’s spirit as they rehearse. “When she’s always in the soundtrack it just naturally provokes you to have strong memories, and reflect and always wonder what she would think,” says Page. Is he waiting until her review comes in? “Oh, I’m sure we will know about that,” he laughs, before making a quiet, plaintive aside to himself: “Oh, Ning.”

SandSong opens at the Sydney Opera House on 10 June before travelling to Canberra, Bendigo, Brisbane and Melbourne
The family of Ningali Lawford-Wolf has given the Guardian permission to use her name and image.